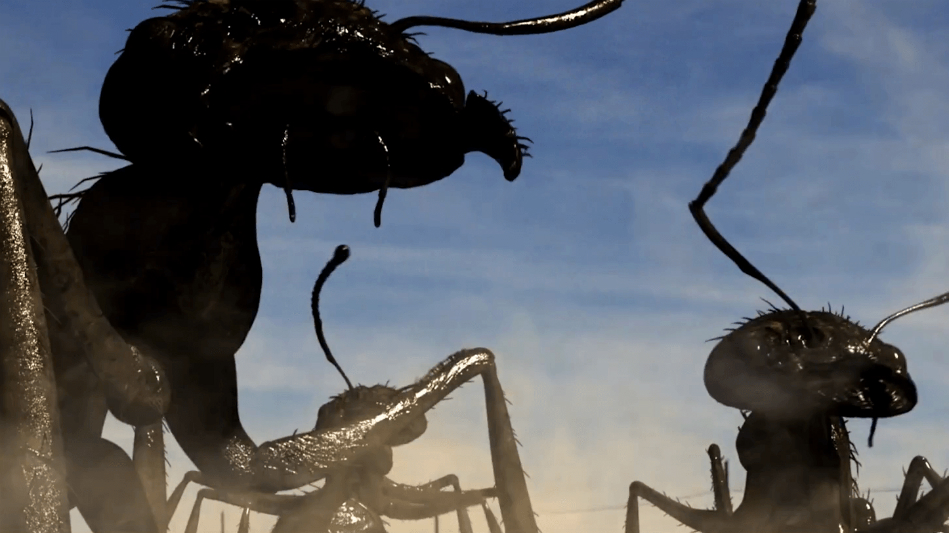 Sadly, over the past half-century or so, giant ants have fallen out of favor in pop culture. The gargantuan insects used to be a Hollywood monster mainstay in movies like 1954’s Them!, 1977’s Empire of the Ants, and even in the classic Outer Limits episode “The Zanti Misfits” with its ant-like aliens, but they haven’t really been seen in decades. That’s about to change thanks to the new film Dead Ant, which pits the monster bugs against a glam metal band. Perfect.

The film tells the story of washed up ’80s rockers Sonic Grave (who bear more than a passing resemblance to Poison), who are hoping a trip to Coachella will reignite their career in an age when glam rock is no longer what the kids are into. But after tripping on peyote in the desert on the way there, they encounter some giant ants who have other plans for the band. The movie from director Ron Carlson is being billed as an indie horror comedy, and it boasts a pretty impressive cast, including Jake Busey, Sean Astin, and even Tom Arnold. You can check out the trailer below.

Our only real complaint about the film is the CGI ants. They don’t look that great, and with a movie with such a campy concept, we feel it would have been much better had they really leaned into the old school feel and used puppets and even some stop-motion ants. But you can’t win ’em all, and overall the film looks pretty fun.

Dead Ant is set to premiere at the Screamfest Horror Film Festival in Los Angeles, which runs from October 10 – 19. No word yet on any theatrical or home release following that, but given the strength of the cast, we doubt it will be too long before everyone gets a chance to watch the movie outside of a festival setting.