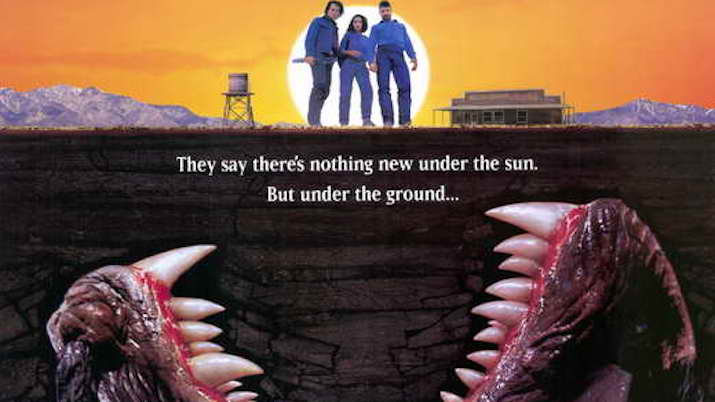 It’s been 27 years since Kevin Bacon and co. battled with giant and deadly worm-things in the original Tremors. While that movie was a brilliant tribute to 1950’s monster movies, nobody would have expected that it would become the basis for a multi-movie franchise spanning close to three decades. But, that’s exactly what it has done, and just today production officially got underway on the sixth (yes, SIXTH) Tremors movie.

While few of the four sequels have managed to match the quality of the original, they have all, at the very least, been a lot of fun. Accompanying Universal’s production announcement today was a plot synopsis for Tremors 6, and it tells us that the Graboids have made their way to the frozen North of Canada. Luckily, Burt Grummer, played by series regular Michael Gross, is on hand to once again grapple with this deadly foe.

Burt Gummer (Michael Gross) and his son Travis Welker (Jamie Kennedy) find themselves up to their ears in Graboids and Ass-Blasters when they head to Canada to investigate a series of deadly giant-worm attacks. Arriving at a remote research facility in the artic tundra, Burt begins to suspect that Graboids are secretly being weaponized, but before he can prove his theory, he is sidelined by Graboid venom. With just 48 hours to live, the only hope is to create an antidote from fresh venom — but to do that, someone will have to figure out how to milk a Graboid!

Tremors 6 will be released on Blu-Ray and DVD sometime in 2018, and studio execs are billing it as the most outrageous movie the series has seen so far. That’s a pretty high bar for a franchise that has already given us a creature called an ‘ass-blaster’.

“This is going to be the craziest, most over-the-top movie in the Tremors saga to date,” said Glenn Ross, general manager and executive vice president, Universal 1440 Entertainment. “It takes the franchise’s signature combination of suspense, action and humor to new explosive heights.”