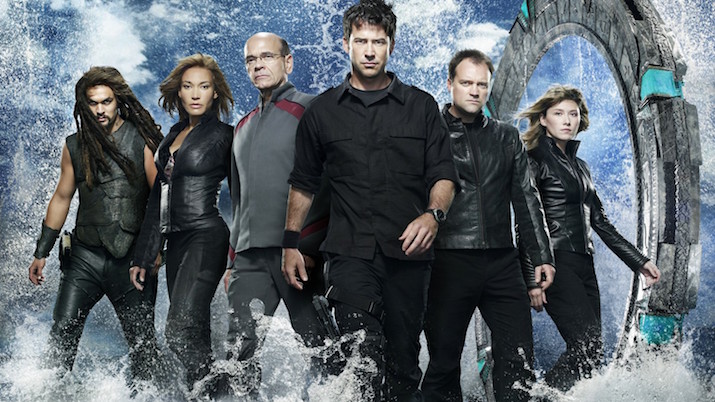 Exclusive: Joseph Mallozzi on the Past, Present and Future of Stargate

As Executive Producer on Stargate SG-1,  Atlantis, and Universe, Joseph Mallozzi has been a major influence in the Stargate franchise’s success. Your favorite stories, characters, and alien races all owe themselves a debt, in some way shape or form, to the Mallozzi’s creativity.

Currently, Mallozzi is busy with the third season of Dark Matter, which is currently filming up in Toronto, Canada. But, with the launch of Stargate: Atlantis on COMET and SG-1 set to return in the new year, he took the time to speak with us and give us his thoughts on the state of the Stargate franchise as well as answer some questions from COMET viewers.

Joseph, thanks for taking the time out of your busy schedule to talk with us. How is everything going on the Dark Matter set?

– Production on Dark Matter’s third season started November 18th and we’re about to wrap our second episode. We hope to have three shot before we break for the holidays. And then, when we return in early January, it’ll be a race to the finish line!

Can you give us a tease of what’s in store for Season 3?

– In season 3, Dark Matter fans can expect more of the show’s trademark twists, turns, shocks and surprises. We’ll learn about our characters’ backstories and answer some burning questions like “What was that dark entity that inhabited THREE?”, “Who created our Android and why?”, and “Who traveled over from the alternate universe?”.

Now onto Stargate. Is the Stargate universe one that you would ever like to revisit?

– I would love to revisit the Stargate Universe. In my mind, all three series have the potential to offer many more stories to longtime fans.

Do you have any ideas for what direction you might like to take the franchise in the future? Hypothetically, of course.

– Ideally, I would love to do another spinoff, perhaps one set on an alpha base, which will include guest stars from all three of the other Stargates: SG-1, Atlantis, and Universe.

I know there were many Stargate stories you never got to tell, but are there any arcs in particular that you wish you could have brought to fruition?

– Well, first and foremost, I would have loved to get the Destiny out of stasis and learned their fate. We had plans to have them encounter a spacefaring race in the show’s third season…

What about the stories that you did get to tell? Are there any arcs or episodes that are especially close to your heart?

– I’ve always been a big fan of the classic SF concepts (i.e. time travel, AU, etc.) and the unique ways they can be applied to our (in this case Stargate) world, our (Stargate) characters. Two of my favorites that come mind are Window of Opportunity and Ripple Effect.

We all know what unfolded on-screen throughout the Stargate series, but have you got any fun, behind the scenes stories that we might not know about? Come on, dish some gossip!

– To be honest, I’ve covered A LOT of my behind-the-scenes experiences over on my blog (www.josephmallozzi.wordpress.com). I started blogging back in late 2006 and haven’t missed a day in 10 years. Those early years offered oodles of Stargate insights, from on-set stories to concept art, cast interviews to behind=the-scene videos. Check it out!

Comet viewers are huge Stargate fans, so we wanted to give them a chance to ask you some questions. Here are a few of our favorites:

Who was the inspiration for Dr. McKay? – Kevin Rogers

– This is a question for Robert C. Cooper, the Stargate Executive Producer who created the character. I know he was named after one of Rob’s high school buddies and that Rodney’s citrus allergy was a nod to one of the early SG-1 writers who would complain incessantly about his own citrus allergy.

What are your thoughts on Roland Emmerich’s plans for a reboot? Be honest! – Patrick Barnes

– I hear it’s not happening. Let’s just say I’m interested in what MGM has planned as a “next step”.

I love Sci-Fi for its ability to go into philosophical areas of science. Do you ever read articles or even research papers for inspiration when it comes to topics within the show. Or do you think that a lack of understanding leaves more room for your own imagination to create new ideas? – Simon Vindroth

– It really depends on the subject matter. I think there has to be a middle ground. If you adhere too closely to the science of fact, you limit yourself as a storyteller. On the other hand, I think your concept need to be at least theoretically sound. Simply “making stuff up” without any attempt to ground it yields something more along the lines of magic than SF.

Were Teyla and Sheppard originally supposed to end up together? It seemed like it was written thusly, to a certain point. – Justin Borden

– Originally, the idea was to create a potential (unrequited) romance between the two but, as the series progressed, that possible development fell by the wayside. There were plans to revisit the possibility in Stargate: Extinction, the SGA movie we wrote following the show’s cancellation but, sadly, it’s a project that never saw the light of a t.v. screen.

Will you and Paul ever release a video with your Stargate theme song lyrics? – Ryan Murray

– Head on over to youtube and search “Stargate lyrics”. You can listen to us sing the theme there!

Don’t worry, we’ll save you the effort. Check the video out below…it’s well worth it!

Catch back-to-back episodes of Stargate: Atlantis Mon-Thur at 10pm, and stay tuned for more information on the return of Stargate SG:1